The Public Service Recruitment Secretariat (PSRS) is a government organ with a status of independent Department established specifically to facilitate the recruitment process of employees to the Public Service.

To be a Centre of Excellence in Public Service Recruitment in the region.

To undertake recruitment of Public servants using modern approaches by adhering to principles of equity, transparency and merits as well as providing advice to employers on employment related matters.

The functions of PSRS are:-

Register graduates and professionals for purposes of ease of reference of filling vacant posts;

Advise employers on various matters related to recruitment, and

Do any other act or thing which may be directed by the Minister responsible for Public Service.

The core values of PSRS cornerstones of work performance and conduct in adaptation to changes in society, government, politics, and technology. The following were PSRS core values:-

Pursuit of excellence in service delivery.

Respect for the law, and

Proper use of official information

The history of the Mwanza region dates back to the pre-colonial rule of the Sukuma, the Zanzibari, the Longo, the Kara, and the Kerewe. When the Germans ruled Tanganyika the Mwanza area became one of the districts in the German Empire.

When British colonial rule was handed over to the East African Colony after World War I, it established the Provinces. Tanganyika had eight (8) administrative provinces and one was Lake Province.

Mwanza Region was officially established in 1963 with four districts of Ukerewe, Geita, Mwanza and Kwimba. In 1972 after the regional devolution policy more districts were established starting with Magu in 1974. Sengerema District was established in 1975 where it was previously one of the divisions of Geita district.

Misungwi was established in 1995 where it was originally the area of ​​Kwimba, Ilemela and Nyamagana district divisions were established in 2002 which formed Mwanza district. In 2010 the new Geita and Simiyu regions were announced. The new districts of Busega and Nyanghwale were also announced to be established in 2010 and its implementation will officially start at any time during the 2011/12 financial year.

Mwanza Region is one of the 30 regions of Tanzania. Regional Boundaries, Mwanza Region is bordered by Geita on the west, Shinyanga and Simiyu on the south and Mara on the east. Lake Victoria Nyanza is located to the north.

Population, prior to the breakup of the new Geita region, Mwanza region had a population of 2,942,148 (2002 census) in 8 districts with an area of ​​19,592 km2. The districts are Ukerewe, Magu, Sengerema, Geita, Misungwi, Kwimba, Nyamaganga and Ilemela. Mwanza City includes Nyamagana and Ilemela districts.

During Tanzania’s 2015 general elections the region had the following constituencies:

They aim to strengthen LGAs systems and Coordinate social-Economic development Services to all our stakeholders through provision of advisory, Technical assistance and statutory Interventions to the peoples of Mwanza Region. 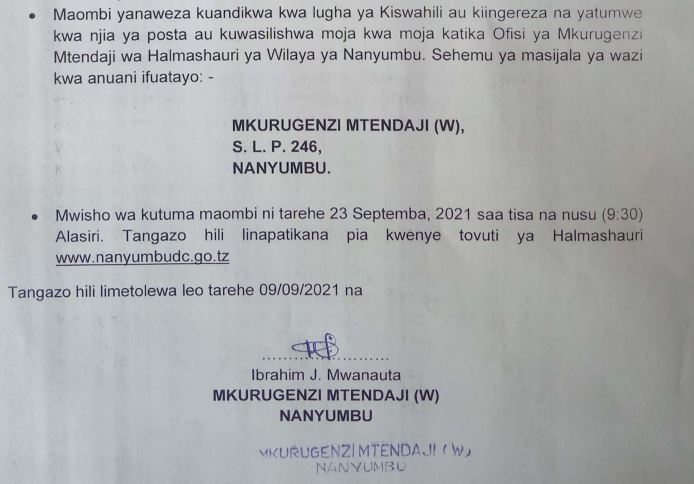 How do I get an NBC Group Loan NBC Bank Tanzania

10 Best Ways to Save Money

U T I : CAUSES, SYMPTOMS AND TREATMENTS