Exponents tell how many times to use a number itself in multiplication. There are different laws that guides in calculations involving exponents. In this chapter we are going to see how these laws are used.

Indication of power, base and exponent is done as follows:

To write the expanded form of the following powers:

To write each of the following in power form:

The Laws of Exponents

Verification of the Laws of Exponents

Verify the laws of exponents

Generally,
when we multiply powers having the same base, we add their exponents.
If x is any base and m and n are the exponents, therefore:

If you are to write the expression using the single exponent, for example,(63)4.The expression can be written in expanded form as:

Generally if a and b are real numbers and n is any integer,

Rewrite the following expressions under a single exponent for those with identical exponents: 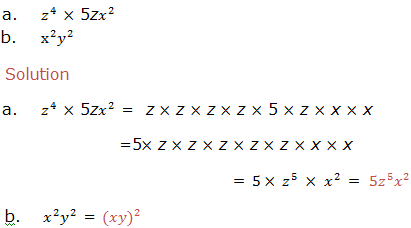 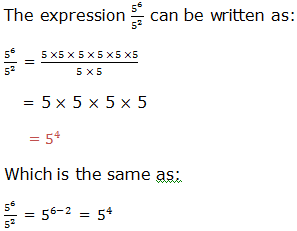 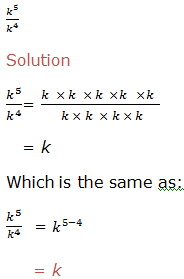 This is the same as:

Which is the same as:

Therefore if x is any real number not equal to zero, then X0 = 1,Note that 00is undefined (not defined).
Fourth law: Negative integral exponents 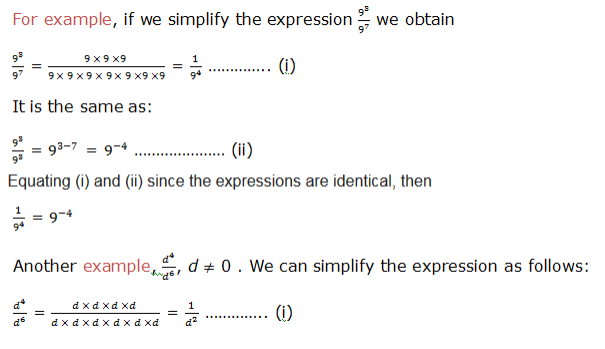 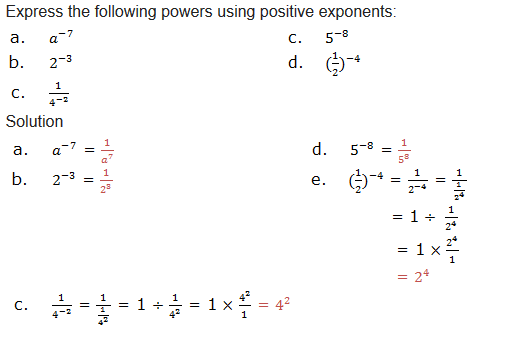 Exercise 1
1. Indicate base and exponent in each of the following expressions:

2. Write each of the following expressions in expanded form:

7. Express 64 as a power with:
Base 4 Base 8 Base 2
8. Simplify the following expressions and give your answers in either zero or negative integral exponents.

9. Give the product in each of the following:

10. Write the reciprocal of the following numbers:

Radicals are opposite of exponents. For example when we raise 2 by 2 we get 4
but taking square root of 4 we get 2. The same way we can raise the
number using any number is the same way we can have the root of that
number. For example, square root, Cube root, fourth root, fifth roots
and so on. We can simplify radicals if the number has factor with root,
but if the number has factors with no root then it is in its simplest
form. In this chapter we are going to learn how to find the roots of the
numbers and how to simplify radicals.

Therefore, the nth root of a number is one of the n equal factors of that number. The symbol for nth root isn√ where√ is called a radical and n is the index (indicates the root you have to find). If the index is 2, the symbol represents square root of a number and it is simply written as√without the index 2.n√pis expressed in power form as,

nth root of a number by prime factorization
Example 1, simplify the following radicals 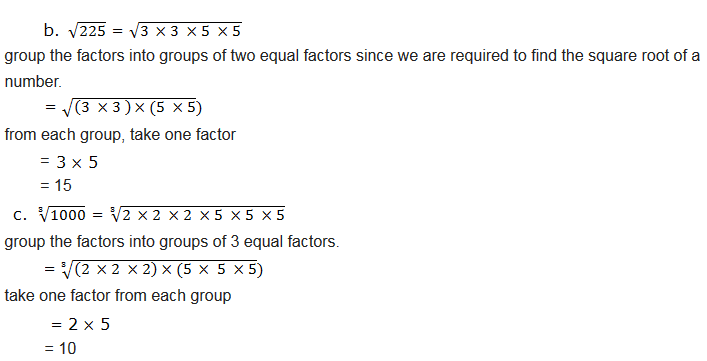 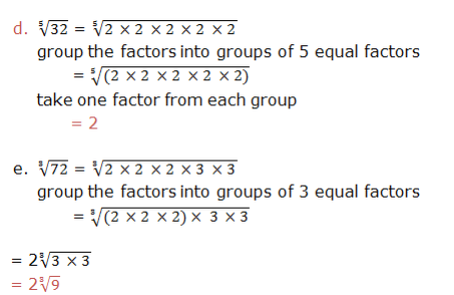 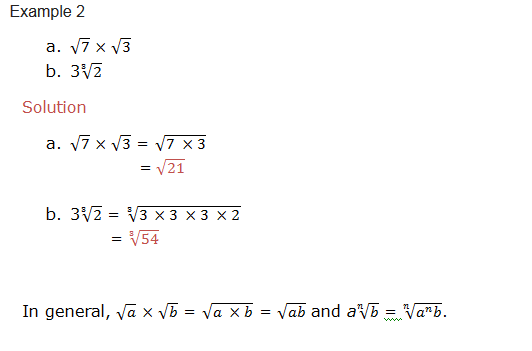 Different operations like addition, multiplication and division can be done on alike radicals as is done with algebraic terms. 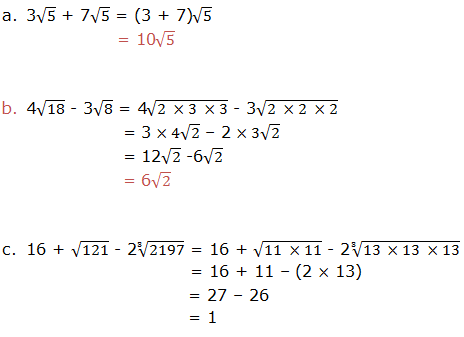 Simplify each of the following expressions: 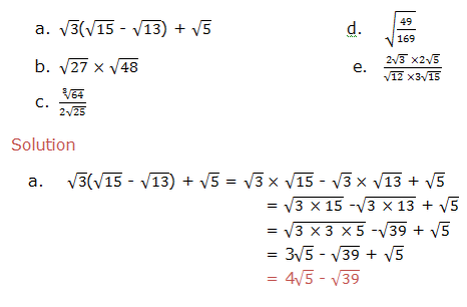 group the factors into groups of two equal factors and from each group take one of the factors. 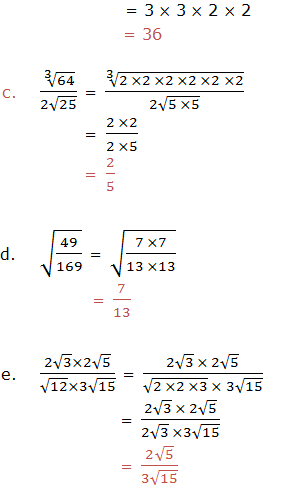 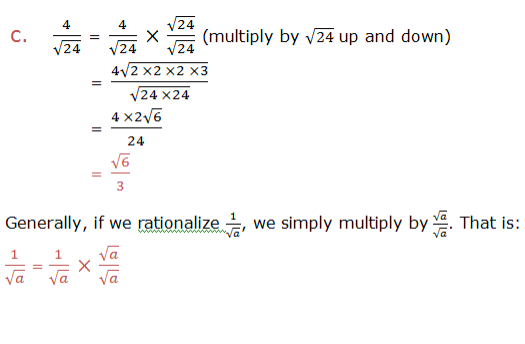 Example 13
Rationalize the denominator for each of the following expressions:

Solution
To
rationalize these fractions, we have to multiply by the fraction that
is equals to 1. The factor should be considered by referring the
difference of two squares. 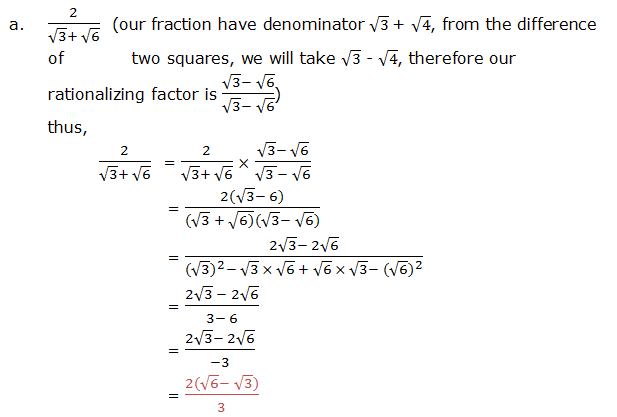 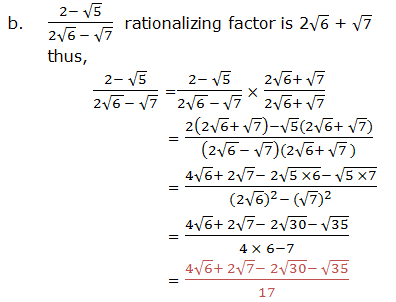 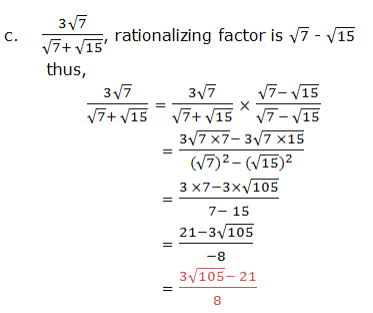 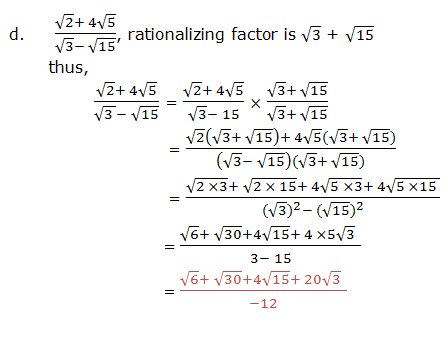 Exercise 2
1. Simplify each of the following by making the number inside the radical sign as small as possible: 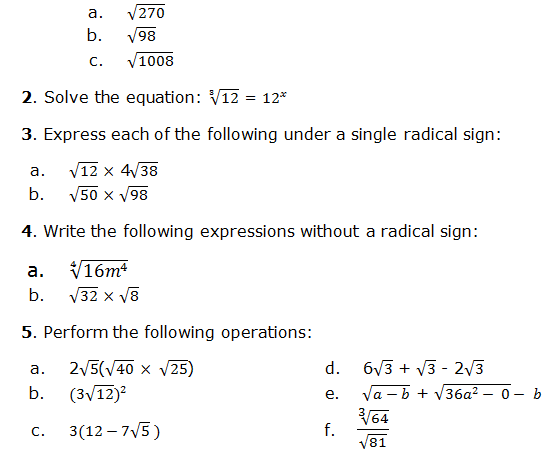 Square Roots and Cube Roots of Numbers from Mathematical Tables

Because we have two groups, this means that the answer has
two digits before the decimal point. Our number is 196, read 1.9 in the
table on the extreme left. From our number, we are remaining with 6, now
look at the column labeled 6. Read the number where the row of 1.9 meet
the column labeled 6.

It meets at 1.400. Therefore the square root of
196 = 14.00 since we said that the answer must have2 digits before
decimal points. Note: If you are given a number with digits more than 4
digits. First, round off the number to four significant figures and then
group the digits in twos from right. For example; the number 75678 has
five digits. When we round it off into 4 digits we get 75680 and then
grouping into two digits we get 7 56 80.

A formula is a rule which is used to calculate one quantity when other quantities are given. Examples of formulas are:

Example 14
From the following formulas, make the indicated symbol a subject of the formula: 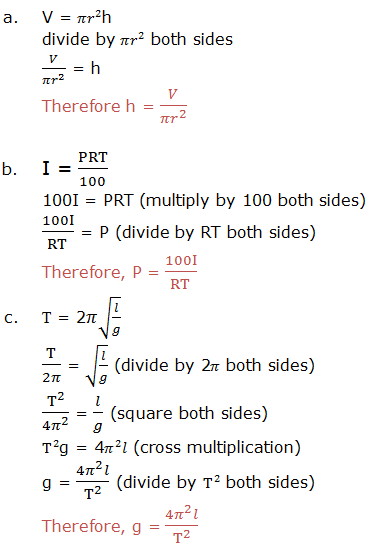 Transposing a Formulae with Square Roots and Square

Transpose a formulae with square roots and square

Make the indicated symbol a subject of the formula: 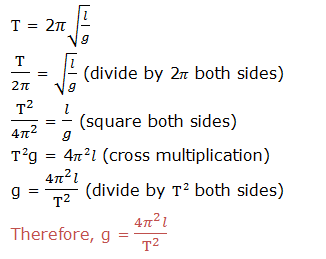 1. Change the following formulas by making the given letter as the subject of the formula.

2. Use mathematical tables to find square root of each of the following:

CHANGES IN THE PROVISION OF WATER SERVICES IN AFRICA AFTER INDEPENDENCE