World Climatic Types and Their Characteristics.

The world climatic types on the basis of temperature are classified into four basic types;

Is the climatic type of the world characterized by mean annual temperature which is over 21ºC and have the following natural vegetation; Equatorial Forests, Monsoon Forest and Tropical Grassland scrub e.g Equatorial, Tropical Desert, Monsoon and Marine areas.

Is the world’s climatic type whereby no month has the temperature of less than 7ºC and have the following natural vegetation, Evergreen Woodland and Grassland Temperate Forest e.g West Margine and China Type.

Is the world’s climatic type whereby one to five month have temperature below 7ºC and have the following natural vegetation; Temperate Forest, Grassland and Scrub e.g British Type, Cool Temperate Interior and Laurentian Type.

Is the world’s climatic type whereby six months or more have temperature below 7ºC and the natural vegetation are Nil, Mosses, Linchen and Coniferous Forest e.g Polar, Tundra, West Margine,etc.

The characteristics of various type of climate are a result of the following factors;

-Influences temperatures on the surface of the earth whereby the areas nearer to the Equator experience higher temperature than those far away.

-Shifting of the overhead position of the sun is determined by latitudes and has an influence on climate.

-Influences temperature and pressure of a region.

-Low altitude regions are warmer and experience high atmospheric pressure while high altitude areas are cooler and have low pressure.

c) Distance from the sea

-Has an influence in both temperature and rainfall of a region. During summer onshore winds have cooling effect on the land which is warm.

-During winter the sea is warmer than the land.

Aspect refers to the direction in which a slope faces e.g in The Northern Hemisphere, the Southern ward slopes are warmer than the North ward facing slopes. This is because the North slopes never receive direct sunshine as the sun in this region never gets over head.

-Windward slopes of highlands receive much higher rainfall than the Leeward slopes.

Current flowing along the Coasts tend to modify the climate of the Coastal regions. Where onshore wind blow over a cold ocean current are cooled from the below and the moisture they are carrying  is condensed and dropped over the sea as rain.

Wind is a medium of transfer of heat and moisture over the land. If wind is blowing from a warm region, it has the warming effects over the region it is blowing across and if wind will blow from cold region it will be cold and will cool the land over which it is blowing.

Like development of settlements, agriculture and construction of dams and creation of man made lakes have influence on climate. In recent times we are realizing the effects of human activities in causing climate change, caused by clearing of forests , draining and cultivating swamp areas, emission of Chlorofluorocarbons and other gases from factories and motor vehicles.

NATURAL REGIONS OF THE WORLD

Natural Regions are geographical areas with uniform physical characteristics that distinguish it from other natural regions.

CHARACTERISTICS OF THESE REGIONS

–  They experience similar problems.
–  They have same geographical back ground.
–  Are unified by the same certain latitudes which help in locating them over.
–  Tend to have almost the same type of soil and vegetation cover.
–  They have the same occupation such as a mining, agriculture and animal husbandry.

–  High temperature about 27°c throughout the year.

–  Rainfall is heavy throughout the year.

–  There are no seasons of the year.

Location: the region is  found between 5° –  20°North and South of the equator Between equatorial and tropical desert.
Area found:   East and Central Africa, Brazilian plateau, Venezuela, Africa and N. Australia.

It is found between 30° –  45° North and south of the equator around Mediterranean ocean only.

–    Type of rainfall is cyclonic rainfall.

–    The climatic condition is dry in summer and cool wet in winter.

It is located between 15° –  30°  latitudes North and south of the equator.Hot Desert of the world are Sahara, Kalahari, Attacama and Namib desert.

–  Very high temperature of about 40°c during day time.

Vegetation
–  There is no complete cover of vegetation on the land because is too scanty.

–   It consist mostly of thorny club bushes and cacti tropics.

–    Rainfall is very little because of the dry winds (winds without moisture).

–    When temperature falls less than Oºc the land is covered with ice (snow).

–    The area experience low rainfall in general which form in spring and early summer.

–  Environmental pollution (air) due to industries.

–   Minimum temperature during night may be less than 40ºc.

–   Most rain falls in summer associated with thunderstorms.

–   Type of rain is convectional rainfall.

–   Coniferous forest ( but fewer than in equatorial climate).

–   Trees are evergreen; leaves are needle shaped, thick and leathery in order to reduce loss of moisture by transpiration.

–   Conical shaped trees do not permit the accumulation of snow.

Soil
– Coarse, infertile soil which do not favor agriculture.  Agriculture is rarely practiced due to short time of grow season.

Location
It is located in Western sides of continents between 45º-60ºN and S of the equator.

–   Type of rainfall is cyclonic and orographic which is  distributed throughout the year.

–   Total annual rain is 760mm but varies with distance from sea.

–   Coastal regions are in oceanic influence (near the ocean).

Vegetation
Deciduous trees are dominant (but are cleared to allow farming).

–   Deforestation due to lumbering, overgrazing.

–   Establishment of settlement and cultivation.

–   floods due to poor drainage,soil erosion.

Location
It is located on eastern side between 35°  and 50° Northern and Southern Hemisphere.

–   Two (2) seasons per year warm in summer and cold in winter. Rain throughout the year.

–   Cold winds carry moisture , they blow outward from interiors which are responsible for low winter temperature.

–   Winds in North America are warmed by Great lakes which results in heavy snow falls in Eastern Canada (Great lakes influence the climate).

–   Precipitation is in the form of snow falls and rain in Southern America and Northern Japan.

–   Rain is convectional and cyclonic.

Location
It is located in the Eastern side of the continents between 23° – 35° north and south of the equator.

–  Hot summers with temperature about 26°c and 13°c during winter.

– Trade winds are dominant seasonal winds they blow on short and bring convectional type of rainfall.

–  Most rain takes place in summer. in winter rain is light.

–   There are variety of soil type depending on location and topography.

–   Beneath deciduous forest soil are called alfisols, rich in plant nutrients due to humus created by fallen leaves of deciduous tree.

–   Also  there is peddlers and volcanic soil.

Environmental Problems
–   Drought condition in the leeward side due to rain shadow effect.

–   Deforestation ( because of lumbering and settlement).

–   Global warming that leads to melting of attractive snow

Is the area in which its climate is influenced by wind that blow from one direction in one season and another direction in another season.
It prevails mainly in Indian Ocean.

Vegetation
–  Deciduous trees/forest in low lands and coniferous forests in highlands.
–  Flowering shrubs and bamboos are common
–  Good temperature and rain makes it possible for growing crops throughout the year.

Location: found mostly in areas where young fold mountain is obtained such as Himalaya, Alps Rockies and Andes.

CHARACTERISTICS OF THE MOUNTAIN REGION

–  When the warm moist air moves up the windward slope of mountain it cools and water vapour condenses into water droplet, which then fall as rain or snow on the windward side

.   The dry area (leeward side) which is away from wind is called rain shadow.

–  Precipitation increase when altitude increase, it is called relief or orographic precipitation.

-Types of rainfall is orographic or relief rainfall.

Animals found
Only few living things survive in the bitter cold of snow.  Just below snowfield a variety of small animals are found.

Human life
It has unfavorable for human settlement.  The in habitats are ESKIMOS of N. America, Yakutsk , Lapps of Scandinavia and Samoyed of Siberia.

Eskimos use clothes made of fur and polar deerskin.

–  In winter they live in house made up of ice blocks known as IGLOOS.

–  In summer they live in tents made up of wood and deerskin.

–  They use canoes called KAYAKS for transport.

–   Nights are long and day are short.

–   Snow covers the land for 9 months during the year.

(B). POLAR REGION
Location: Large parts of Greenland, Antarctica and interior of Iceland. It lies for away from Equator.

– Temperature below 0°c due to effect of cold polar. Continental mass.

–   The region experiences continuous darkness since it is inclined far from the sun.

–   Summer are quite cool and highest temperature hardly exceed 100c  opposite direction  North- East from October to April.

–  Earthquakes due to tectonic plate movement.

–  Drought condition in some areas. 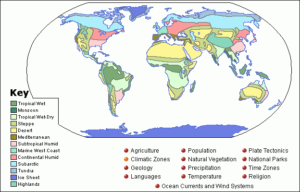