Hydrogen is the lightest of all the elements. There is very little hydrogen in the earth’s atmosphere. Hydrogen is so light that its molecules are not held by the earth’s gravity and they diffuse into space.

Preparation and Properties of Hydrogen

The Preparation of Hydrogen Gas in a Laboratory

Explain the preparation of hydrogen gas in a laboratory

The gas may be collected by downward displacement of water. But when the gas is required free from moisture it is passed through water to remove first, any hydrogen chloride gas and then through concentrated sulphuric acid to remove moisture before being collected by upward delivery. The gas is prepared by upward delivery method because it is lighter than air and is soluble in water.

Set up the apparatus as shown in figure bellow. Into a flat-bottomed flask, put some pieces of zinc and add dilute hydrochloric acid by means of a thistle funnel. There is effervescence, and a gas is given off which is collected over water. Zinc chloride, which is formed, dissolves to form zinc chloride solution. 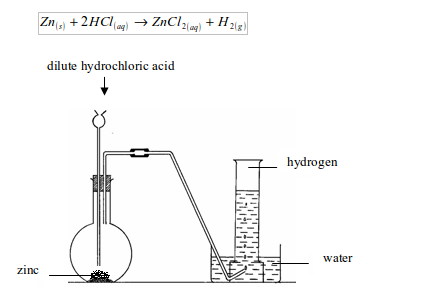 A mixture of hydrogen and air explodes with a ‘pop’ sound when a flame is applied.

The Properties of Hydrogen

1. It combines easily with other chemical substances at high temperatures. For example, it combines with oxygen to form water. A mixture of the two gases will not react at room temperature. At higher temperatures, or when a flame is applied, the mixture will explode. When hydrogen and oxygen explode, the product is water.

Water is just the common name for the substance “hydrogen oxide”.
2. Hydrogen acts as a reducing agent, by removing oxygen from some compounds. For example, copper (II) oxide is reduced to copper by heating it in a stream of hydrogen. The hydrogen is oxidized to water.

3. It is neither acidic nor basic, so it a neutral gas.
4. A mixture of hydrogen and oxygen explodes when lit.

Aim: To investigate the effect of hydrogen on copper (II) oxide
Procedure 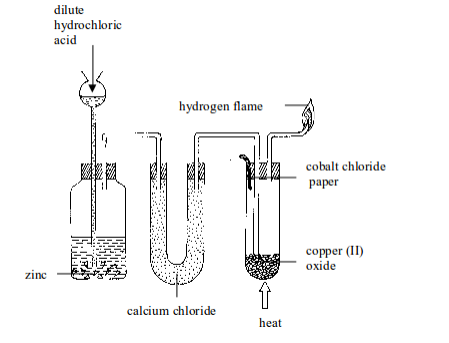 Reduction of copper (II) oxide with hydrogen gas
Questions
Answers
1. Black copper (II) oxide is reduced by hydrogen to brown copper metal.
2. (a) Cobalt (II) chloride paper changes its colour from blue to pink.
(b) The paper is used to indicate that water has been formed in the reaction between copper (II) oxide and hydrogen. This water turns the colour of the paper from blue to pink.
(c) The other substance that can be used instead of cobalt (II) chloride paper is white anhydrous copper (II) sulphate, which turns blue when in contact with water.
3. Enough time should be allowed for hydrogen to replace the air in the test-tube because a mixture of hydrogen and oxygen in the tube is explosive when lit.
4. The size of the hydrogen flame deteriorates with time as hydrogen supply grows smaller following complete displacement of hydrogen of the hydrochloric acid with zinc. Deterioration can also be caused by use of excess copper (II) oxide or strong heating, meaning that most hydrogen is used in the reduction of the oxide.
5. (a) The element taken by hydrogen from copper (II) oxide is oxygen. In this experiment, hydrogen reduces copper (II) oxide to copper, while hydrogen itself is oxidized to water:

(b) No. Hydrogen can only reduce those metals that are below it in the electrochemical (activity) series.
Uses of Hydrogen
Uses of Hydrogen Gas
State uses of hydrogen gas
1. It is used in the manufacture of ammonia by the Haber process, which is based on the direct combination of hydrogen and nitrogen.

2. It is used in the hardening of vegetable oils to make margarine.
3. It was formerly used for inflating balloons and air ships. But hydrogen is inflammable and many accidents occurred. Its use has been replaced by helium (another gas occurring in air). Nowadays, hydrogen is used by meteorologists to fill weather balloons, which carry weather instruments that record information on various elements of weather in the upper atmosphere.
4. It is used to prepare water gas, which is used as a fuel for space rockets. When hydrogen contained in water gas is burned in air, it produces extremely high heat energy that is used to power rocket engines.
5. It is used in welding by the atomic hydrogen torch. The complete combustion between hydrogen and oxygen is a highly exothermic reaction and can produce an oxy-hydrogen flame that has a temperature of nearly 2000ºC, and is therefore useful in the welding and cutting of metals. However, the explosive nature of the combustion of hydrogen with oxygen makes the use of oxy-hydrogen flame less favourable than the oxyacetylene flame.
6. It is used in the synthesis of hydrochloric acid. In this case, hydrogen combines directly with chlorine to form hydrogen chloride gas.

The hydrogen chloride gas is then dissolved in water to form hydrochloric acid.
7. It is used in the manufacture of methanol (wood spirit). In this process hydrogen combines directly with carbon monoxide.

SCIENCE AND TECHNOLOGY IN DEVELOPMENT

An Enemy of the People By H. Iibsen