The Concept of Cell

The Meaning of the Cell

Explain the meaning of the cell

Plants and animals are made up of units called cells. The cells are microscopic in such a way that they cannot be seen by our naked eyes. Some organisms like protozoa, diatoms and bacteria consist of one cell and are called single-celled or unicellular organisms. Some are made up of many cells and are called multicellular organisms.
The cell structure of living things was first seen by Robert Hooke in 1667 when he examined fine slices of cork. Robert Hooke believed that the cells were empty and that the cell wall and cell membrane were the most important parts of the cell but now cell contents are seen to be the most important ones. Therefore a cell can be defined as the smallest unit of living things or a cell is a basic unit of life.
The Characteristics of the Cell
Mention the characteristics of the cell
Characteristics of the cell include the following:
The cell theory
The cell theories were proposed jointly by two scientists namely Schleiden, a Belgian botanist, in 1838 and Schwann, German Zoologist, in 1839
Difference Between Various Types of Cells
Differentiate various types of cells
PROKARYOTIC AND EUKARYOTIC CELLS
Prokaryotic cells are cells with no membrane-bound nucleus. The DNA lies free in the cytoplasm in a region known as nucleoid. They have no true nuclei. Examples of prokaryotic organisms are bacteria.
Eukaryotic cells are cells whose nuclei are bounded by nuclear membrane. They are surrounded by two nuclear membranes called nuclear envelope. Examples of eukaryotic organisms are protoctists, fungi, plants and animal cells.
Differences between cell wall and cell membrane
Different between prokaryotic and Eukaryotic cells
The Functions of Different Parts of Plant and Animal Cells
Explain the functions of different parts of plant and animal cells
Basically a cell has three main parts
Cell membrane (plasmalemma)
This is a thin flexible membrane made of protein and oil. It has the following functions:
Cytoplasm
Cytoplasm is a transparent jelly-like fluid and may contain particles such chloroplasts or starch grains or oil droplets. It contains up to 80% water and the remainder is mainly protein. It is a place where chemical reactions take place
Nucleus
A nucleus is a ball-shaped or oval body located inside the cytoplasm. It cannot usually be seen unless the cell has been stained with certain dyes. It consists of nucleoplasm bounded by nuclear membrane. The nucleus is a cell control centre.
The following are the functions of the nucleus:
Cell wall
The cell wall is only found in plant cells. It is made up of cellulose. When the cell is growing the cell wall is fairy plastic and extensible. It becomes tough and resists stretching when the cell has reached full size. The cell wall is non-living. It has the following functions:
Vacuole
In animal cells, vacuoles are small droplets of fluid in the cytoplasm variable in size and position. In plant cells, the vacuole is a large, permanent fluid-filled cavity which occupies a greater part of the cell. In plants, the fluid is called cell sap. The cell sap may contain salts, sugar and pigments dissolved in water.
The vacuole performs the following functions:
Mitochondria
Mitochondria are found in all aerobic eukaryotic cells. A mitochondrion is surrounded by an envelope of two membranes, the inner being folded to form cristae (singular: crista) It contains a matrix with a few ribosomes, a circular DNA molecule and phosphate granules. 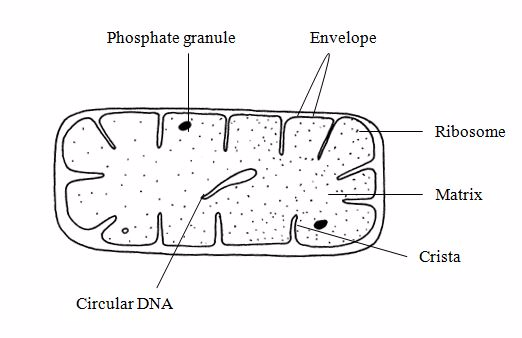 Mitochondrion
A mitochondrion is a power house of a cell. It contains respiratory enzymes involved in respiration. It absorbs oxygen and glucose. The glucose is broken down to CO2 and H2O. Energy is released from glucose bonds to form ATPs (for use in other vital functions e.g. growth, movement, etc.
Chloroplast
Chloroplasts are disc-shaped organelles. They are found in plant cells and algae cells. A chloroplast contains a green substance called chlorophyll. It is surrounded by an envelope of two membranes and contains gel-like stroma through which runs a system of membranes that are stacked in places to form grana. 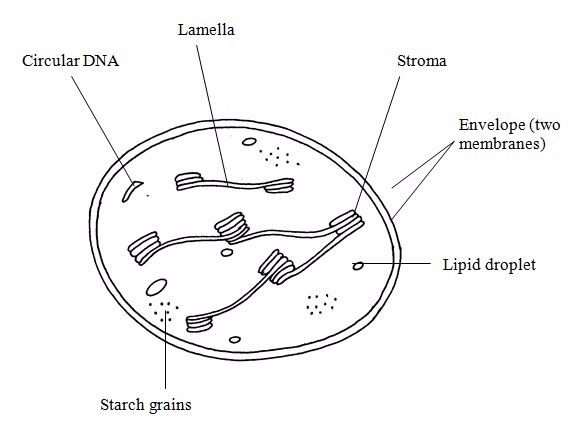 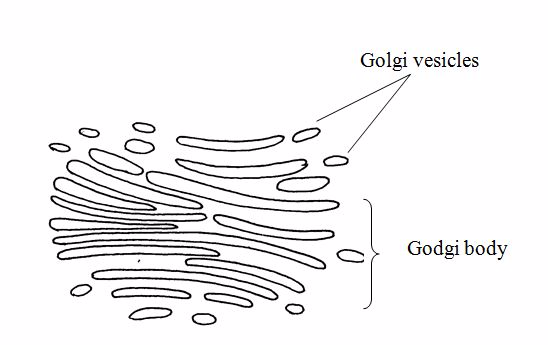 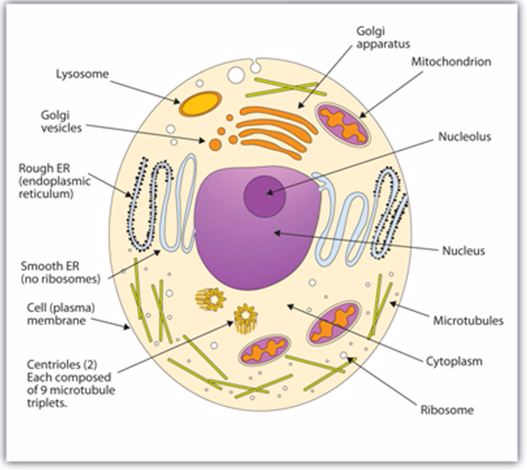 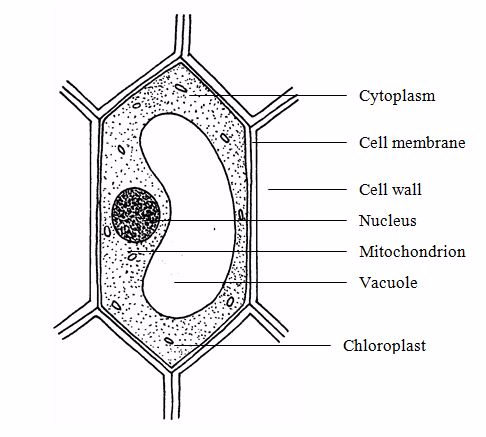 Similarities and Differences of Plant and Animal Cells
Outline similarities and differences of plant and animal cells
Differences between plant cell and animal cells
Similarities between animal cell and plant cells
Cell Differentiation
The Concept of Cell Differentiation
Explain the concept of cell differentiation
When most cells have finished dividing they become specialized. This means that:
The changes in shape and chemical reactions enable the cell to carry out its special function. The process by which cells are specialized to perform a particular function is called cell differentiation or ‘division of labour’ within the organism. Similarly, the special functions of mitochondria, ribosomes and other cell organelles may be termed as division of labour within the cell.
The Importance of Cell Differentiation and Formation of Tissues, Organs and Body Systems
Outline the importance of cell differentiation and formation of tissues, organs and body systems
Humans have many different types ofcellswith different jobs, such as bloodcellsthat carry oxygen and nervecellsthat transmit signals to all parts of the body.Cell differentiationis the process by whichcellsbecome specialized in order to perform different functions.
Even multicellular organisms begin as just a single cell. Getting from one single cell to billions of specialized cells that perform different functions is a process that happens with the regulation of DNA and RNA. It can also be influenced by factors in the environment.
Cell differentiation holds a lot of importance for two basic reasons. Firstly, it helps to identify stem cells, which could be used in the future to deal with conditions that require transplant and form the basis of embryonic stem cell research. Also, in cytopathology, the level of cellular differentiation is used as a measure of cancer progression, where the term ‘grade’ is used as a marker to determine how differentiated a cell in a tumor is. Thus, the importance of this process cannot be underestimated as it could hold the key to future treatments for fatal diseases.
Difference between Cells, Tissues Organs and Body Systems
Differentiate cells, tissues organs and body systems
Animal cells
Nerve cells
These are specialized for conducting impulses of an electrical nature along the fibre. The fibre may be very long e.g. from the foot to the spinal column. They are the longest cells known. 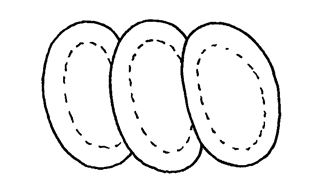 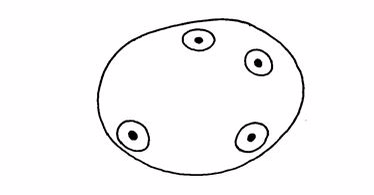 Egg cell
Muscle cells
These are elongated cells which form the muscle tissues. Muscle cells are highly specialized in that they are able to shorten a half or even a third of their resting lengths. This characteristic enables the muscles to contract and expand. 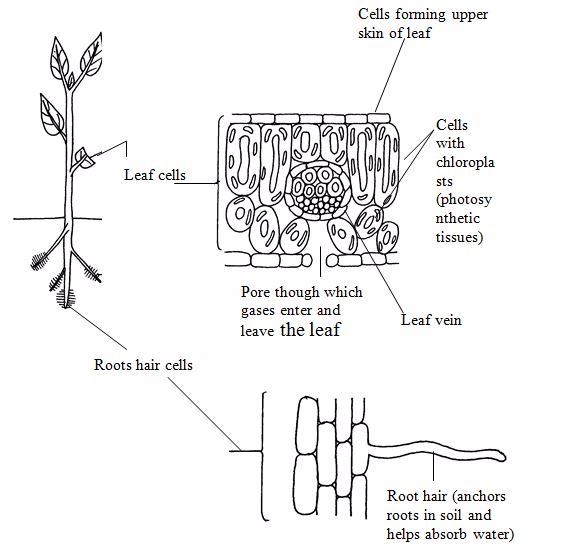 Phloem cells
These are food conducting cells in a plant, joined end to end, and where they meet, perforations occur in the walls. Through these holes, the cytoplasm of one cell communicates with the next.
Xylem cells
The cells conduct water and mineral salts form the soil to all parts of the plant. They are also responsible for mechanical support.
TISSUES
A tissue is a group or collection of similar cells performing a specific function. Tissues vary in size, shape and function.
Examples of tissues
Animal tissues
Animal tissues include epithelial tissue, muscle tissue, nervous tissue, blood tissue and bony tissue.
Epithelial tissue:Epithelial tissues cover the body lining cavities, hollow organs and tubes. They are responsible for(i) protection of the underlying structure from dehydration, and chemical and mechanical damages;(ii) secretion; and(iii) absorption. 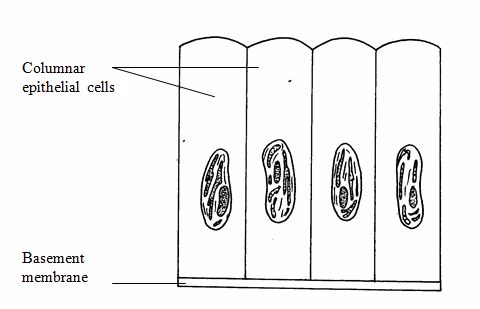 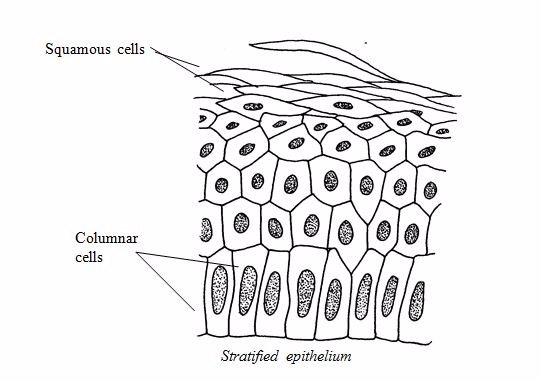 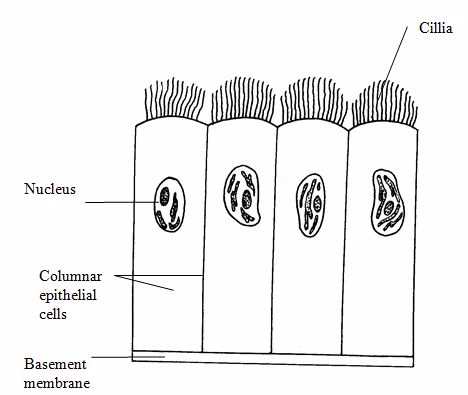 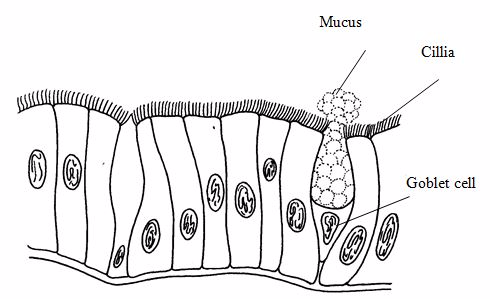 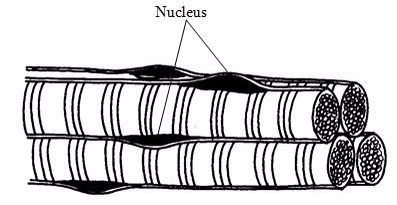 Skeletal muscle fibres
Smooth muscle tissues
These are found in the walls of hollow organs. They perform the following functions: 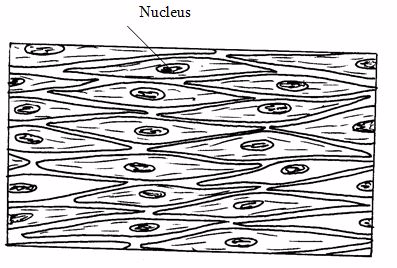 Smooth muscle fibres
Cardiac muscle tissue
This kind of muscle tissue is found only in the heart wall. It helps in contracting and relaxing of heart muscles thus pumping the blood to various body parts.

Cardiac muscle fibres
Nervous tissues
Nervous tissues have endings that detect changes in the environment. They transmit and conduct nerve impulses to the brain and spinal cord and to the effector organs. 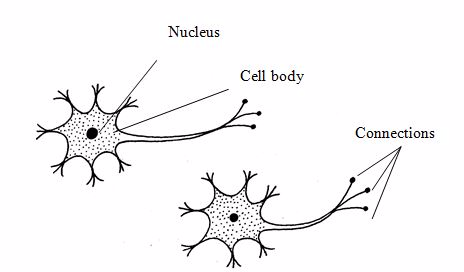 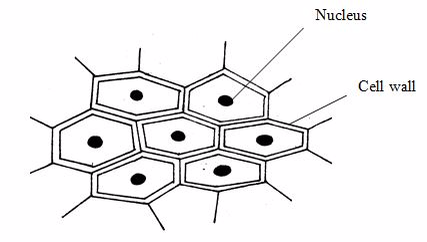 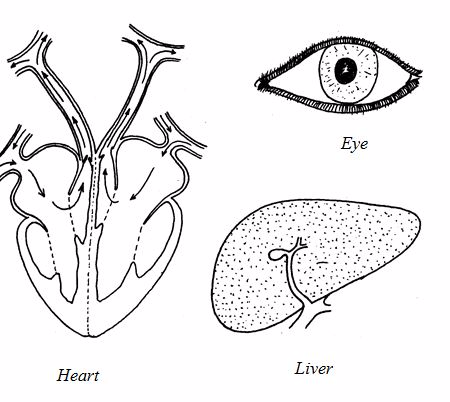 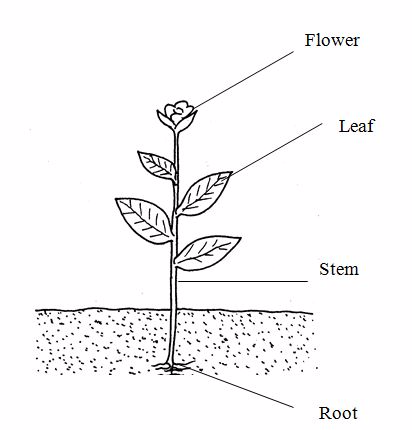 Plant organs
Organ system
A system refers to several inter-related organs performing a particular function.
Digestive system
The main organs that make up the digestive system are alimentary canal, liver and pancreas.The main function of this system is to digest and absorb food. 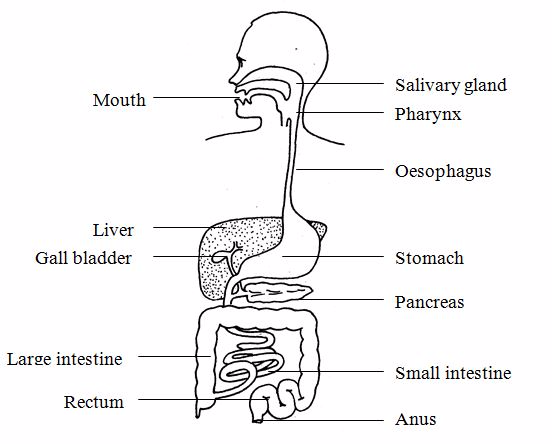 The digestive system
Circulatory system
This system consists of the heart, arteries and veins.The role of the circulatory system is to transport gases, food, hormones and distribute heat. 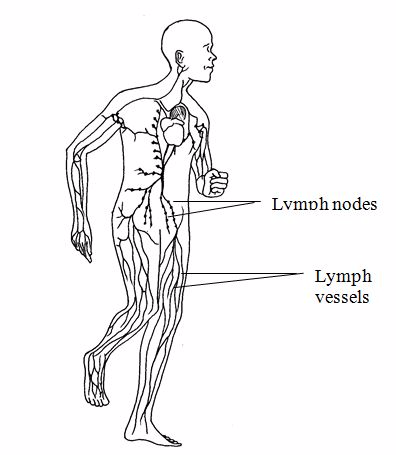 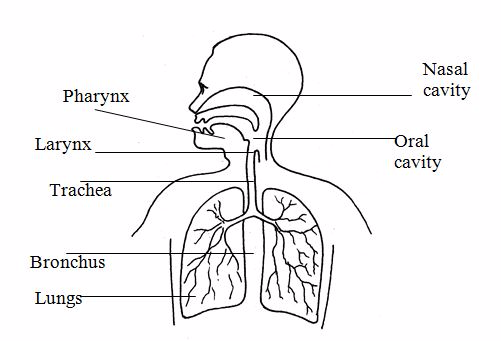 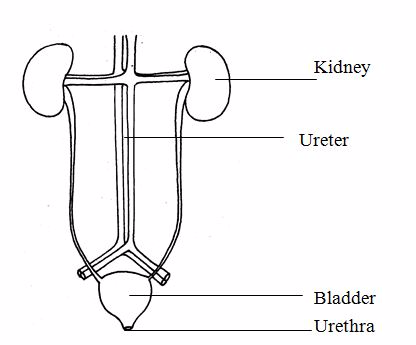 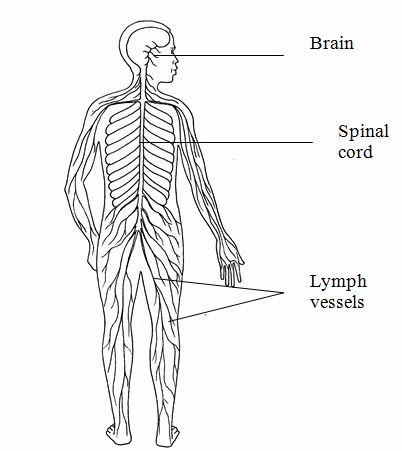 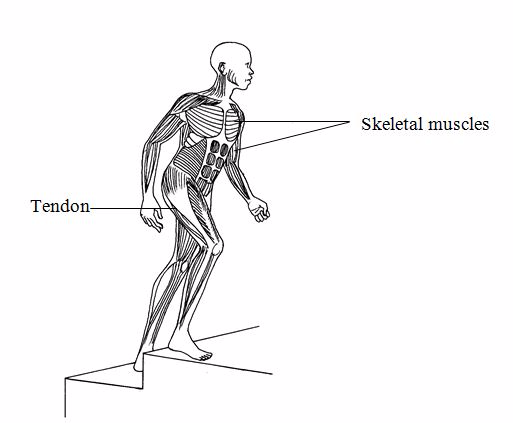 The skeletal muscles
The reproductive system
It consists of the ovaries, testes and uterus. Its role is to produce offspring. 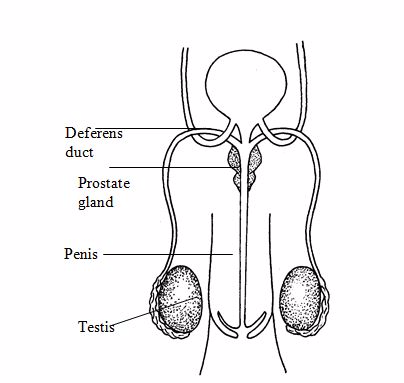 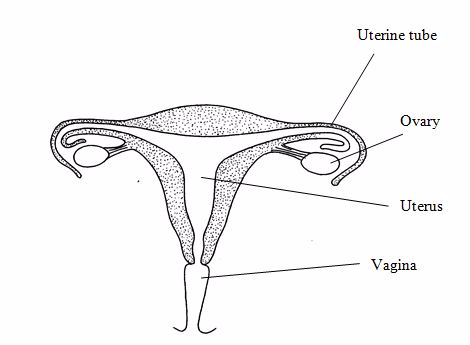 Female reproductive system
Endocrine system
It consists of endocrine glands. Its role is to produce hormones. 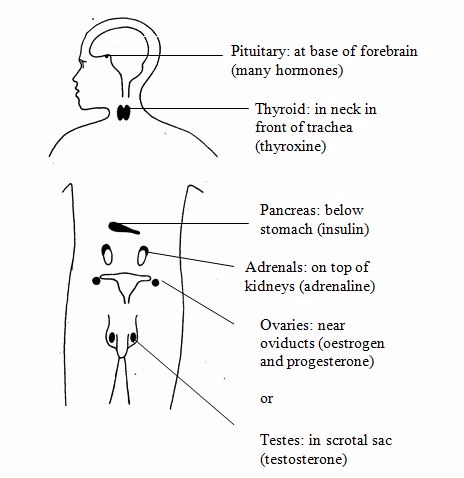 Endocrine system
Skeletal system
It consists of a system of skeletons. Its function is to support the body, protect internal organs and produce blood cells. 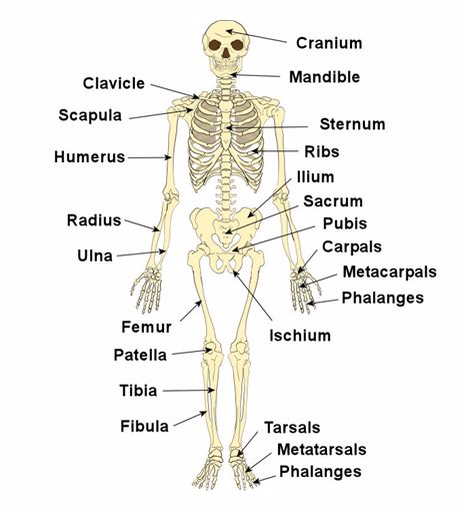