Heat capacity is the amount of heat required to raise the temperature of an object or substance by one degree. The temperature change is the difference between the final temperature ( Tf) and the initial temperature ( Ti).
The Factors which Determine Heat Quality of a Substance
Explain the factors which determine heat quality of a substance
Heat is a form of energy transferred between bodies due to difference in temperature between them. The energy possessed by the body due to its temperature is called the internal thermal energy. The heat content is due to the random motion of the particles that make up the body. The
heat content is determined by its mass, temperature change and the specific heat capacity of the substance. 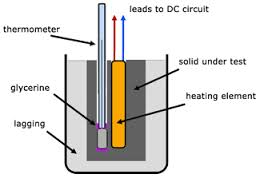 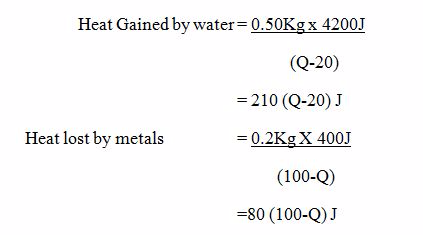 If there are no heat Losses to the surroundings, then.
(Heat gained by water) = (Heat lost by metal)
210 (Q-20) = 80(100 – Q)
21(Q-20) = 8 (100-Q)
21Q – 420 = 800 – 8Q
21Q +8Q = (800+420)
29Q = 1220
Q = (1220/29)
Q = 42.1ºC
Change of State
Change
of state is the transformation of the condition of matter from one
(state) to another caused by the change In temperature.
The Behaviour of Particles of Matter by Applying Kinetic Theory
Explain the behaviour of particles of matter by applying kinetic theory
The
kinetic theory of matter (particle theory) says that all matter
consists of many, very small particles which are constantly moving or in
a continual state of motion. The degree to which the particles move is
determined by the amount of energy they have and their relationship to
other particles. The particles might be atoms, molecules or ions. Use of
the general term ‘particle’ means the precise nature of the particles
does not have to be specified.
Particle
theory helps to explain properties and behaviour of materials by
providing a model which enable us to visualise what is happening on a
very small scale inside those materials. As a model, it is useful
because it appears to explain many phenomena but as with all models it
does have limitations.
Solids, liquids and gases
The model can be used to help explain:
The properties of matter 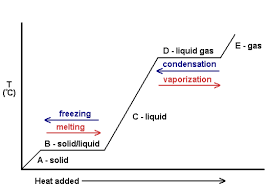 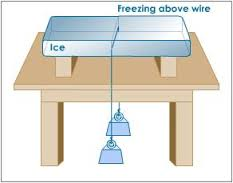 The Concept of Boiling and Evaporation in Respect to the Kinetic Theory of Matter
Give the concept of boiling and evaporation in respect to the kinetic theory of matter
If
a liquid is heated, the particles are given more energy and move faster
and faster expanding the liquid. The most energetic particles at the
surface escape from the surface of the liquid as a vapour as it gets
warmer. Liquids evaporate faster as they heat up and more particles have
enough energy to break away. The particles need energy to overcome the
attractions between them. As the liquid gets warmer more particles have
sufficient energy to escape from the liquid. Eventually, even particles
in the middle of the liquid form bubbles of gas in the liquid. At this
point the liquid is boiling and turning to gas. The particles in the gas
are the same as they were in the liquid except that theyhave more
energy. At normal atmospheric pressure, all materials have a specific
temperature at which boiling occurs. This is called the “boiling point”
or boiling temperature. As with the melting point, the boiling point of
materials vary widely, e.g., nitrogen -210°C, alcohol 78°C, and
aluminium 459°C.
Any
material with a boiling temperature below 20°C is likely to be a gas at
room temperature. When liquids boil the particles must have sufficient
energy to break away from the liquid and to diffuse through the
surrounding air particles. As these particles cool down and lose energy
they will condense and turn back to liquid. When steam is formed by
water boiling at 100°C the particles quickly condense as the surrounding
air temperature is likely to be much less that 100°C so the particles
cool rapidly. In fact the “steam” coming out of a boiling kettle can
only be seen because some of the gas particles have condensed to form
small droplets of water.
Evaporating
Within
a liquid some particles have more energy than others. These “more
energetic particles” may have sufficient energy to escape from the
surface of the liquid as gas or vapour. This process is called
evaporation and the result of evaporation is commonly observed when
puddles or clothes dry. Evaporation takes place at room temperature
which is often well below the boiling point of the liquid. Evaporation
happens from the surface of the liquid. As the temperature increases,
the rate of evaporation increases. Evaporation is also assisted by windy
conditions which help to remove the vapour particles from the liquid so
that more escape.
Evaporation
is a complex idea for children for a number of reasons. The process
involves the apparent disappearance of a liquid which makes the process
difficult for them to understand. It is not easy to see the water
particles in the air. Also, evaporation occurs in a number of quite
differing situations – such as from a puddle or bowl of water where the
amount of liquid obviously changes, to situations where the liquid is
less obvious – such as clothes drying or even those where there is no
obvious liquid at all to start with – such as bread drying out. A
further complication is that evaporation may be of a solvent from a
solution e.g. water evaporating from salt water to leave salt. These
situations are quite different yet all involve evaporation.
Evaporation
may also involve liquids other than water e.g. perfume, petrol, air
fresheners. The particle model can be used to explain how it is possible
to detect smells some distance away from the source.
Latent Heat of Fusion and Vaporisation
Demonstrate latent heat of fusion and vaporisation
Latent
Heat is the energy when is supplied in form of heat required to change
the state of the Matter from one form into another.
Latent heat is not determined (detected) by using a thermometer. So latent heat is also called hidden heat.
Specific
latent Heat is the energy supplied to a unit Mass and change Its state
from one state of Matter to another state of matter.
Latent heat of Vaporization is the heat required to change a liquid into a gaseous state at constant temperature. 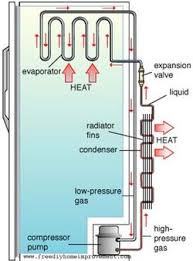 How it Works
A volatile liquid such as freon, evaporates inside the copper coils A surrounding the freezing cabinet or the refrigeration.

TOPIC 8: NEO COLONIALISM AND UNDERDEVELOPMENT IN THE THIRD WORLD COUNTRIES ~...